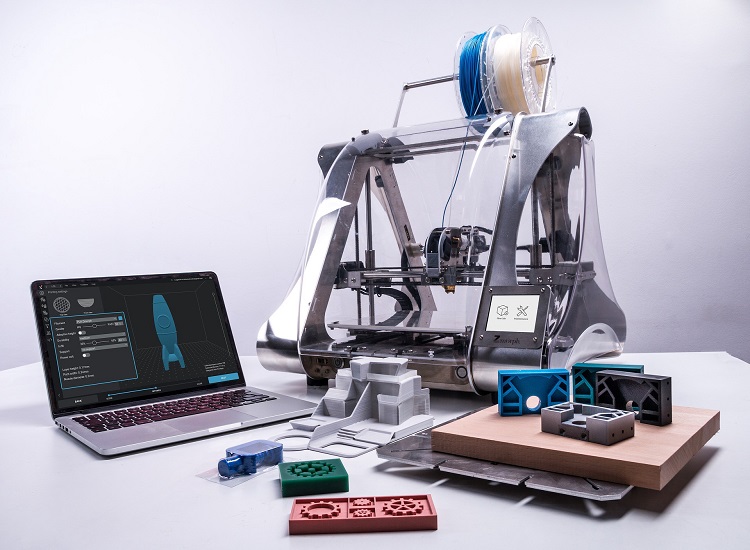 You walk with your friends through the shopping street after school. Suddenly you see something great in the shop window. It’s that beautiful smartphone cover, the cover you’ve always wanted. But then you see the price tag and you walk on quickly. You wonder how you can still get such a cool cover for your mobile, without having to pay the main prize. Fortunately, scientists have the answer, namely 3D printing: printing the future!

What exactly is 3D printing? Is it a printer where you put the paper on the back and a 3D folded airplane comes out on the front? No, it is not that simple. A 3D printer, like other printers, contains some kind of ink cartridges. However, this does not contain ink, but for example gypsum powder or plastic. For example, the printer can print a chess piece by applying the gypsum powder layer by layer, but it is not as simple as it sounds.

Before a printer can print a 3D object, there must, of course, be a digital document. Just as you must have typed a document for a workpiece, a 3D drawing must have been drawn for this printer, so that the printer can recreate this drawing in 3D. There is a lot of software available for this, but this is much more complicated than typing in a word document. And even if you get the printer working with such a document, it will still take that printer an hour for a simple chess piece before the chess piece is ready.

Scientists have been busy designing such a 3D printer since the year 2000. They are originally from a university in the United States. They started developing printing with materials such as plaster and plastics in order to print prototypes (test models) of designed products. Not much later they sold the idea to a number of factories that have continued with it as is heard in the news. For example, they print glasses that can be custom made per person.

Print food
The possibilities seem endless. You could print anything that comes to mind. For example, scientists have already been able to print a bionic ear (fake ear that really works) with real animal cells. This seems to completely open the way to organ printing. It is also possible to print plaster for your broken arm to size. But batteries and rocket parts are also good examples that scientists are already capable of. Research is even being done into food printing. It is expected that in five years’ time, they will be able to print food that everyone can eat without tasting the difference between printed and real food.

Danger
However, the 3D printer does not only have advantages. For example, last year an American made a 3D drawing of a gun on the internet (see photo). And since there are already people who have a 3D printer at home, that does not make the world safer. For example, there have been heated discussions in politics about allowing these printers in the home environment. No clear agreements have yet been made on this.

Buy a 3D printer?
Even though there are already 3D printers on the market. They are often not yet of good quality. You can, of course, print a few things with such a printer, but a requirement is still a 3D drawing that gives the instructions to the printer how to print its object. So if you happen to come across that mobile case again, remember the name of the case and search the internet to find such a 3D drawing of that case.

Of course, you also have to have a 3D printer, because without a printer you have no use for that drawing. But until then, we have to wait until good 3D printers are available in the store. And then it remains to be seen whether those things are already affordable. Because otherwise you better just buy that one case in the store.

More Than 120 Species of Mammals Suitable as Pets