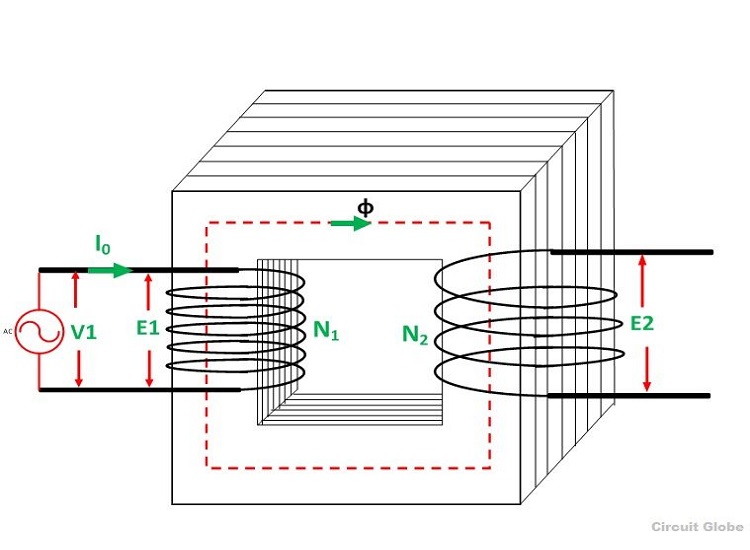 As stated in the article about current, resistance, and voltage, the current is transported from the power plant to your house using different voltages. For example, the voltage on the high-voltage line is 50,000 volts, while the socket only supplies 230 volts. And that 230 volts would be too much to chase through your mobile phone at once when charging. So-called transformers are used to convert a voltage into a higher or lower voltage, without losing too much energy.

Induction
The principle of induction is actually very simple: when an electrical conductor (such as a piece of wire) is in a changing magnetic field, a current flows in that conductor. This principle does not work when the electric field is stationary. Only when the electric field moves (for example because the magnet that generates it spins) does a current flow. According to this principle, a rotating magnet generates power in your bicycle dynamo.

This principle also works the other way around. As you read in this article, an electric current always generates its own magnetic field, which revolves around the wire. See also here.

Good use is made of both principles in a transformer. As you can see in figure 2, the current on the primary side (that is the ‘entrance’) flows through a coil with a certain number of turns around a piece of metal (the core). The current through that coil generates a magnetic field. As a result, the core itself becomes magnetized and thus leads the field lines through a second coil on the secondary side (the ‘exit’). Inductance generates a current in this second coil. In this way, the current is passed from the input to the output, without there being a direct electrical connection.

But how does the tension change? That is very simple: if the number of turns of the secondary coil is smaller than that of the primary coil, the voltage there is also lower. That makes sense, too: the same amount of current flows through each turn of the primary coil so that each turn contributes equally to the magnetic field.

The more turns, the stronger the magnetic field. In the secondary coil, the energy of that field is ‘divided’ over fewer turns, so that more current can be generated in each turn than in one turn of the primary coil. At the same time, it takes less effort for an electron to move through the coil so that the voltage drops.

Power
In a transformer with fewer turns in the secondary coil, the output voltage is, therefore, lower than the input voltage, while the current at the output is higher. In fact, if the number of turns is twice as small, the voltage will also be twice as small, while the current will be twice as large. The product of current and voltage, or the power, does not change with a transformer.